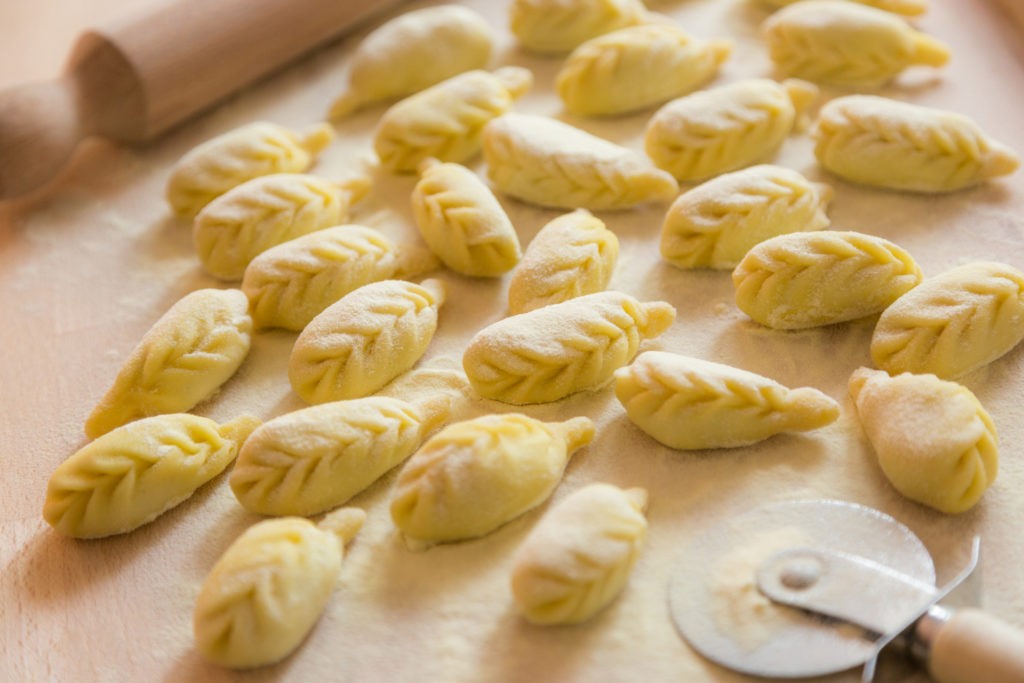 If you are planning to visit Sardinia you cannot miss a plate of home-made Culurgiones!

Culurgiones, Culurgionis, Culurzones, Culunjonis – the name can change in relation to the particular area of the island – are a traditional stuffed pasta, which dates back probably to the XIX Century when this kind of food was a simple product of a poor and pastoral cooking, but still an important and privileged variation of food if compared to the most common meals.

Today the Culurgiones are a symbol of Sardinian food and you can find them in almost every restaurant of this wonderful island. Anyway, you must be aware of the fact that if you ask for Culurgiones you will have a different kind of product depending on the specific area of Sardinia you are in that moment: in the center area they can be filled with ricotta and spinach, with just pecorino cheese, or can be sweeter in the north, in Gallura, filled with ricotta and flavored with lemon or orange rind.

Finally, there are  probably the most famous Culurgionis of Ogliastra, which is the central-oriental region of Sardinia. Since 2015 Culurgionis were listed as PGI (Protected Geographical Indication) product.

How are they made?

Fresh pasta is filled with a mixture of smashed potatoes, pecorino sardo (Sardinian sheep’s milk cheese), and mint. The uniqueness of this type of pasta is especially the shape: the round piece of fresh pasta, once filled, is closed with a procedure called “a spighitta”, which means like wheat spikes. Some other type of Culurgiones in Sardinia have a squared shape just like the common Italian “ravioli”.

There are theories also about what kind of cheese has to be used: some use a particular cheese made by a mix of sheep and goat’s milk added to aged pecorino, some others say that the only and real cheese to be used is the “fiscidu”, a local sour pecorino.

In the past, in a lot of villages of Ogliastra, Culurgionis were cooked for some festivities like carnival, as a good wish for the harvest, and finally to celebrate the Day of the Dead – in the village of Ulassai people used to leave one plate of Culurgiones for the dead during the night of the 1st November, then, the day after were offered to the neighborhood and to the poor people.

Now prepare yourself to taste a flavor of tradition and local products: Culurgiones are served generally with a simple and fresh tomatoes soup and basil, or just with oil and sage.

You can find here below an exhaustive video of how Sardinian people make Culurgiones. In the video, Gaia demonstrates how to prepare and cook them following her grandmother’s traditional recipe: Buon appetito!